Earlier this month, the St. Louis Post-Dispatch published a well-researched article on traumatic childbirth (“In traumatic childbirth, women say a healthy baby isn’t the only thing that matters“).  The article featured a mom, Erin Shetler, whose daughter was born by episiotomy and forceps (before a manual removal of the placenta) without informed consent on Erin’s part.  Her doctor didn’t just fail to get her permission–he never so much as notified her that they were performing any of these procedures (she had an epidural so was not aware at the time).  Erin was devastated.  She felt violated, and was plunged into mental and emotional turmoil–including post-traumatic stress disorder–for months.  She says all that could have been avoided had her doctor taken a few seconds to tell her what was happening.  (Erin’s story is here.  She and I became friends through Improving Birth, when she reached out to tell us she wanted to share her story.)

Improving Birth’s campaign to #BreaktheSilence on abuse and trauma in maternity care was also featured in the article, and I was interviewed about it.  That campaign shared the stories of hundreds of women reporting bullying, physical force, manipulation, and cruelty in their care.  The campaign also revealed a clear pattern: unsafe, outdated care that was enabled by blatant violations of women’s bodies, decisions, and rights. 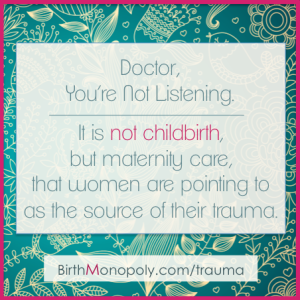 In response to this article, a local obstetrician wrote a letter to the newspaper, titled “Expectant mothers must realize giving birth is unpredictable.”  She stated that birth doesn’t follow a plan, that informed consent is not possible in emergency situations, and that “realistic childbirth expectations would decrease the growth of childbirth trauma.”  She also compared U.S. maternal mortality rates from 1900 to today.  It should be noted that, today, the U.S. has an abysmal maternal mortality rate compared to its peers and the only rising maternal mortality rate in the developed world.

I wrote a letter to the editor, which wasn’t published.  I’d still like to get this letter out there, though, for one reason only: the doctor’s well-meaning sentiments are an excellent example of what we hear all the time as justifications for unethical and substandard care.  From care providers, policy makers, and even the general public, there’s a failure to listen to what women are saying, and a failure to acknowledge the crisis state of maternity care in the United States.

An obstetrician’s response to the recent article about traumatic childbirth highlights the unfortunate disconnect between what women are saying and what some of their care givers are willing to hear.

It is not childbirth, but maternity care, that women are pointing to as the source of their trauma.  It is not in medical emergencies, but in everyday, routine care that women are reporting they were ignored, bullied, coerced, or even forced into interventions they do not want or need.

Yet, in response to allegations by women giving birth that their rights were violated and they were subjected to unsafe care, it is often implied that women should lower their expectations, trust their doctors, and be glad they have a healthy baby at the end of a dangerous process.

Unfortunately, such ideas are not logically possible for many informed women. The U.S. has some of the very worst health outcomes in the developed world for women giving birth, and doesn’t do very well for infants, either. Nine in ten American women receive maternity care that increases, rather than decreases, their risks of complications.  In the last year, major organizations like the American College of Obstetricians and Gynecologists and the Joint Commission have openly pointed to the variable practice styles of individual physicians as contributing to this kind of care.

In other words: suspending expectations and the right to information seems like the exact opposite of what women should be doing when it comes to their own health and that of their babies.

Moreover, women have the fundamental legal and ethical right to information and to decision-making when it comes to their health care, including their maternity care. These rights are grounded in the U.S. constitution, and strongly upheld by the American College of Obstetricians and Gynecologists, whose Ethics Committee calls informed consent “a fundamental tenet of contemporary medical ethics,” a “requirement,” and an expression of the patient’s “moral right to bodily integrity.”

Implying that informed consent compromises health outcomes is dangerous, inaccurate, and outdated—and condescending to women.  Modern maternal healthcare must change to reflect the status of women in 2014 as having legal capacity and the mental ability to make the most important decisions of their lives within a system fraught with needless risk.

We urge maternal health care providers to really listen to what women are saying.  So much trauma could be prevented by simply listening to and respecting the women giving birth.