While some states are working hard to make maternity care safer, less expensive, and more humane, Arizona is going backwards, fast​, led by its state Department of Health Services.  New interpretation of existing state regulations ​that go into effect on July 1 impose strict “one-size-fits-all” mandates on pregnant Arizona women, that violate their privacy and include things like periodic vaginal exams throughout pregnancy and labor.

These regulations are just the latest skirmish in an ongoing tug-of-war between Arizona and its women about private family decisions related to childbirth.  This comes after a long process last year updating regulations related to home birth, and a failed legislative attempt earlier this year to restrict those rights.

What’s so ironic about these mandates is that they are expressly for women who choose midwives for their care—​that is, the group of women that tends to be lower risk, and informed about and engaged in their healthcare.  These women have thoughtfully chosen midwives for a wellness model of high-quality, individualized care, and many of them are paying out of pocket for ​this kind of expertise.

But now, the midwives who care for them will be required to transfer to the care of an obstetrician—someone in a separate but complementary profession—any woman who declines any of the state-mandated tests or exams.  This begs the question: does the state view obstetricians as better at coercing women into vaginal exams?  Or are doctors expected to physically force women to open their legs?

Imagine you’re a woman with a history of sexual abuse (that’s 1 in 5 women).  Imagine you find these exams during labor to be incredibly painful.  Imagine you’ve had an emergency delivery in the past because of a dangerous infection caused by an unnecessary vaginal exam.

And whether you are physically forced, or coerced by the threat of losing your trusted care provider, isn’t the point.  The point is that every woman has the right to decide if and when a hand goes in her vagina.  Full stop.

Enforced consent is not informed consent

The state says these regulations are about safety, but science and common sense don’t support that.  It’s not as if women are wantonly refusing necessary testing and treatments at the expense of health—it’s that unnecessary testing and treatments carry real health risks, as well as expense.  For example, many care providers don’t even perform vaginal exams because of the increased risk of infection they impose on the mother and baby.  They assess dilation, if necessary, using non-invasive techniques.  By mandating vaginal exams, however, the Arizona regulations don’t allow either care providers or the women they serve to choose for an alternative–or to opt out of a measurement that simply may not be that useful in a labor that is progressing.

Regardless of its intent, the state’s imposition of prescribed treatment ignores a fundamental right of all U.S. citizens: the right to informed consent.  In treating patients, all healthcare providers have the obligation to present all of the information about and alternatives to any suggested treatment, and all patients have the unequivocal right to say “no” to any treatment.

Coercion nullifies informed consent.  Violations of healthcare rights can be considered malpractice or even assault.  When a state promotes and enforces violations of civil rights, there might even be grounds for a constitutional challenge. 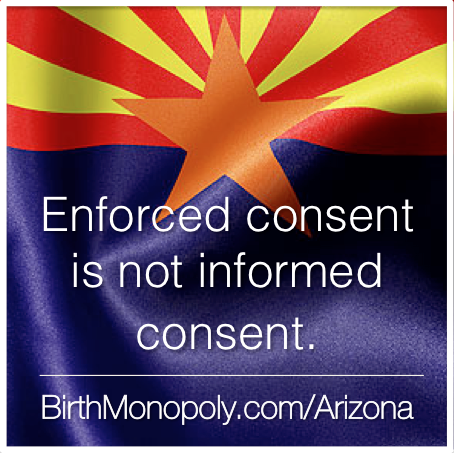 So what other options do Arizona women have as of July 1?  For many women in Arizona, there are two options only: if not at home with licensed midwives under the direction of the state, then in their local hospital with an obstetrician, subject to those policies and routine procedures.  Let’s take a quick look at the for-profit institutions where the state is directing the dollars of its growing families.

If you’ve ever had a Cesarean, you’re looking at mandatory surgery in about half of Arizona’s hospitals—against national health policy.  Due to liability concerns, they don’t even allow women to attempt a vaginal birth if they’ve had surgery in the past, even though, very generally speaking, each subsequent surgery increases risk to mother and baby, while each subsequent vaginal birth lowers risks.  Human rights, legal rights, and ethical guidelines support a woman’s right to choose the method by which she gives birth and to refuse surgery.  Unfortunately, that right is all but meaningless against unwilling care providers in a facility with unsupportive policies.

For low-risk women, care in some Arizona hospitals mirrors what many U.S. hospitals provide: routine practices shown by current science to be of no benefit or harmful to pregnant women and their babies, things like prohibiting food and drink in labor, restricting women to bed, and over-reliance on machines to monitor labor—machines that the U.S. Preventive Services Task Force issued a recommendation against almost 20 years ago, partially due to their 99% false-positive rate, which increases complications for moms without improving health outcomes for babies.

In fact, here’s what some women said in June 2014 about their ​actual ​hospital and obstetrician experiences in Arizona.  These statements cover a range of outdated and even harmful protocols, poor treatment, and serious violations of their rights.  It’s safe to assume that these are not stand-alone stories, either, since many of them refer to facility polic​ies that apply to all women:

·      I was not allowed to eat during my labors. With my first and second, they didn’t let me get out of bed or tell they were going to give me an episiotomy. During my second labor, the nurse gave me Pitocin in my IV before telling what she was doing. – Y., Mesa, AZ
·      [My induction] was horrible and I was under these conditions for well over two days. My back pain from being in the bed on my back for that long was horrible and by the time I was dilated enough to push I was nearly too exhausted because I hadn’t eaten in days. Horrible horrible. Not to mention I couldn’t sleep in that position and every time I tried to turn to my side the nurses came in and yelled at me because it moved the monitors. So no sleep and no food for days… Then I was supposed to push. It was such a bad experience that I waited years before having another baby. – S., Tucson, AZ
·      I was coerced into having an induction with my first baby. My Doctor told me that if I didn’t induce on my due date with my first baby then he couldn’t be responsible if something bad happened to her because he couldn’t get to the hospital in time. Also was not allowed to eat anything during labor. Also was stitched up way too tight after I tore by this same doctor. – L., Scottsdale, AZ
·      I have only had one baby in the hospital. It was my first. Liberties were taken. I wanted a natural birth without IVs and such but I was told that I had to have them. I asked for water and was not allowed to have any as well. Pitocin was given to me without my consent as well. I did not have a great experience and had some complications. – C., Prescott, AZ
·      This one hospital boasted about their fancy bathtub for moms in labor. When I was in labor, they told me it was being serviced or something. When my doctor came in, he asked if I wanted to use it, they said I couldn’t, he said unhook her and let her take a shower than. Come to find out they were liars and didn’t like having to use the tub. My doctor also stopped them from giving me Pitocin after my baby was delivered. – J., Gilbert, AZ
·      My first 4 pregnancies, there was no medical indication at all but I was still strapped in to be monitored. They wouldn’t let me use the ball or even stand or anything. There was no reason for it and sadly I didn’t know my rights then. – A., Chandler, AZ

The state cannot and should not make those choices for her.​

What’s this really about?

If the state were concerned about safety, it would go after the for-profit institutions where the vast majority of women give birth, facing mandatory surgery policies, outdated protocols, and providers who impose these things on women against their constitutionally based rights.  Interestingly, the very people who represent those for-profit institutions exert real influence on the current efforts in Arizona to control what goes on outside of hospitals.

But this isn’t about safety.  And the state said as much during a recent meeting, when it was questioned about the specifics of some of the mandates.

Let me say that again: this is not about safety.

It is about compliance.

It is about compliance for a group of women who have opted out of the traditional hospital system, and into a model of care that system can’t comprehend.  This model of care, midwifery, is all about supporting women in giving birth on their own steam, supporting them in making their own decisions about their bodies and babies, and only interfering when necessary.  That’s something our outdated traditional system—where women are still told what they are “allowed” and “not allowed” to do—is not set up for.

Realistically speaking, women are not going to leave the midwives they trust because of these regulations.  Arizona women will continue to make their own informed decisions, and their midwives will be put in the position of putting their hands inside their clients at the behest of the state, or lose their licenses.  And while this is an attack on midwives, it is, moreso, an attack on women.

And the state is willing to put its hands into their vaginas to enforce those beliefs.

Arizona women are now standing in the gap for all women, in rejecting these regulations on their bodies and their family decisions—and an invasion of their sexual organs.  It is my hope that they will stand for themselves, their babies, and their midwives with a message back to the state that compliance, in this case, is not an option.  I hope they demand from the state reasonable regulation that is supported by evidence and common sense, and fully respects women giving birth as the #1 stakeholders in this deal.

Arizona women, this woman stands with you.

If you are interested in supporting Arizona’s families, please join them at Rights for Homebirth.  An organized consumer effort is underway!