Physician Trauma: A Doctor Answers, Why Do We Sometimes Do Terrible Things? 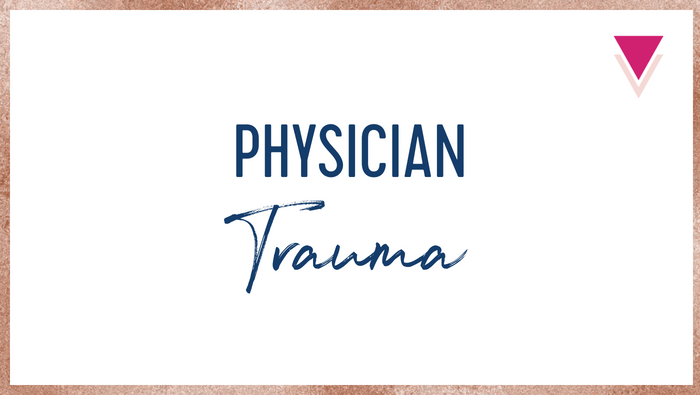 There is no excuse for abuse.  Abuse is abuse.  To eliminate abuse, it is helpful to understand what breeds and enables it.

Recently, I posted on the Birth Monopoly Facebook page about healthcare workers sometimes performing procedures like cervical checks on sleeping women, triggering a thread of outraged comments.  Soon after, I got an email from a practicing obstetrician who had seen my post and offered to tell me “why doctors do a lot of the terrible things they do.”  She hits the nail on the head, and physician trauma has a lot to do with it.  Medicine is a culture of trauma, where well-intended folks are immersed in abusive training, traumatized both in training and practice, and then expected to care for others with no support or treatment for their own wounds.

Obstetric violence occurs on both an individual and a structural level.  Physician trauma is an aspect of a breakdown on the individual level that enables the structural violence.

Here’s what the obstetrician said in her email:

Why would a doctor do cervical exams on women who are sleeping? The reason is the same for why doctors do a lot of the terrible things they do–because of the culture of medical training. For example, during residency, we had to check EVERY patient EVERY two hours, with rare exceptions. If we missed a check, we got in trouble. You could be yelled at, berated, punished with extra work, whatever. Now, when you start residency, you pretty much know nothing. You may not have ever even checked a cervix. The inadequacy you feel is overwhelming. You are called “Intern”, not doctor and not by your name. Lots of crying and hiding in stairwells. You are working 80 hours a week, with 24 hour shifts where you are going non-stop. You are given this instruction to perform these checks, without fail, every time. No one tells you to check the patient while they are sleeping, but the message is (either indirectly or directly), “Do what you are told, or I will make your life hell.”

So you go in and a patient you’ve never met before is sleeping after some IV pain meds. You try to wake her up and tell her you want to check her cervix. She might moan or stir but she certainly doesn’t wake up. What do you do? If you don’t have a cervical exam to tell the team, you will pay. She knew we were going to check her cervix, right? She understood that when she came into the hospital, right? So you do it to save yourself. She loses her humanity because you’ve lost yours. And by the end of four years of that culture, you’ve forgotten. You’ve forgotten that you can wait. That you won’t get in trouble, or get yelled at. That there is a person that belongs to that vagina. So you just keep doing it.

I totally understand traumatized women not wanting to see their doctors as victims.  My mother (non-medical) tells me that no one feels sorry for doctors. Our income is too high. I think it is true and it is a shame, because behavior like this is the result. 400 physicians kill themselves every year. That’s the entire class of four medical schools gone every year. Our healers are hurting. People who are treated like shit treat people like shit. The abused become the abusers, you know?

I think it is important to emphasize that just because we trained that way, it is still NOT acceptable to behave in that way. I think it should still be discussed in the context of how we fix this problem. Our training and the lack of support following bad outcomes are the two areas that absolutely will have to change if we want to make progress. There are a ton of other issues facing physicians (liability, burnout, etc), but I think those two are the most important when we are talking about respectful treatment of patients and patient autonomy.

None of this will change until our training changes.

Another obstetrician, Dr. Jesanna Cooper in Birmingham, Alabama, talks about her own trauma as a provider in Birth Allowed Radio episode 6.

Among the two biggest group of people caring for women and babies during birth, the rates of suicide, PTSD, and burnout are astronomical.  Physicians are also facing litigation trauma (three out of four obstetricians will be sued in their careers), while nursing has the distinction of being the “most bullied profession.”  Horizontal violence–hostile behaviors among members of a marginalized group–is well documented within nursing.  (Horizontal violence is also prevalent in midwifery and doula work.)  I talk about physician trauma and nurse trauma in my new online course, Know Your Rights: Legal and Human Rights in Childbirth for Birth Professionals and Advocates, as one of the big factors affecting how we are treated as patients during birth.  People with major deficits of their own around self-care and mental health are not in an optimal position to care for other vulnerable people in high-pressure situations.

Circle of Trauma in the Birth Room

I created this conceptual image for a talk I gave to several obstetric departments earlier this year as an illustration of all the trauma that may be coming into the birth room–most of which people are probably unaware they are carrying or how it affects their attitudes, behaviors, and words. 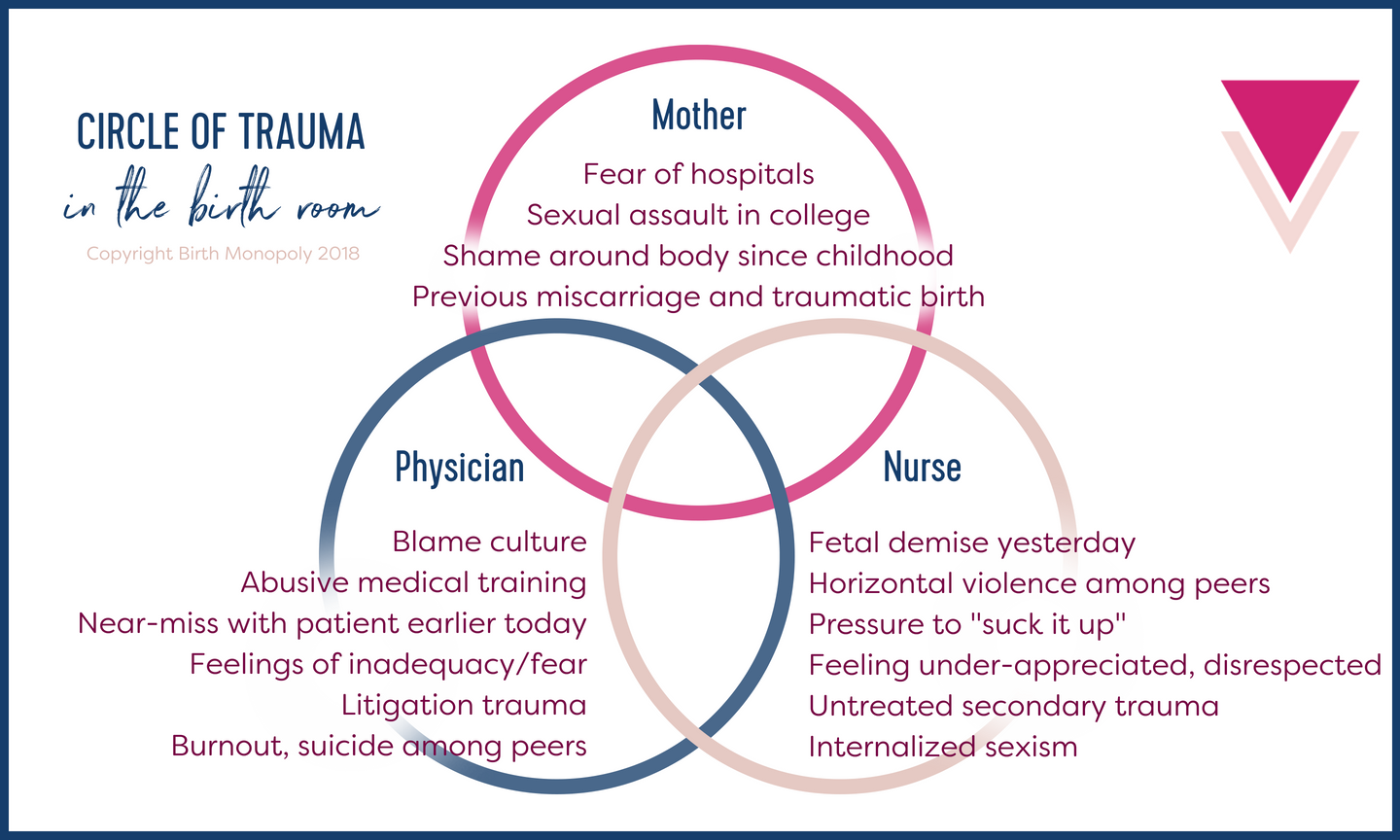 I want to thank this anonymous doctor and Dr. Cooper for being honest about their own experiences and the impact on their practice.  We can’t fix a broken system without understanding exactly what’s broken.  And as difficult as it may be to conceive of abusers as victims themselves, the reality is that victimization and abuse are not opposite ends of a spectrum; they are intertwined with each other.  In maternity care, this is a crucial piece of the bigger picture.

Are you a physician or nurse who can relate?  Comment below.