A midwife from Iowa sent me a note after I published “Kentucky Birth Monopoly: Begging for Birth Centers,” in which I shared the laudable decision of a circuit court judge to reject three Kentucky hospitals’ argument that a birth center was unnecessary–and his determination that the hospitals don’t have standing to bar their competition from entering the market.

She wrote to share that they’d gone through a very similar process in Iowa, but the outcome for them wasn’t as good.

In both states, there is a Certificate of Need (CON) process that creates a state exemption from competition for healthcare facilities.  New facilities must obtain a CON from the state in order to move forward, and existing market players are allowed to weigh in on whether or not new facilities are needed and deserve a certificate.  It gives the folks already in business the power to effectively block expansion of the marketplace–or, put another way, to maintain a monopoly.

It’s an outdated concept in a time when we understand that competition can be very good for healthcare.  It’s especially outdated in maternity care, where a chokehold on the market by hospital-based facilities means that the majority of the population has access to only one type of care: a high-intervention, institutional model that is inappropriate for and even harmful to the majority of healthy women.  Putting hospitals and birth centers together in the same category in this process reflects a fundamental misunderstanding of the very different model of care and services delivered by birth centers and hospitals.

Here is the message from the midwife:

I work at a Federally Qualified Health Center [a community-based clinic that provides health care, dental care, mental health care, and substance abuse care to people, regardless of their ability to pay], where we enroll approximately 140 women each year into prenatal care. The local hospitals have denied any privileges for Certified Nurse Midwives (CNMs) to care for our maternity patients, so we end up having to transfer the care of our moms over to family practice doctors in the third trimester.  Our moms want midwife care, and certainly want to stay with the CNMs they know all through the pregnancy and birth.

We presented our application to establish a free standing birth center, functioning out of the same building as our health center. We met all of the criteria that was asked of in the application. We knew we would have opposition from the 3 hospitals in our county, and boy, did we. The hospitals paid for lawyers, and got every business in town to write opposing letters; hospital employees, and even the state legislators were asked to write opposing letters.

We had good support, but as you might guess, our letters were from the hundreds of families who dearly wanted to have this option available to them. We also had good letters from the Iowa section of the American College of Obstetricians and Gynecologists, nursing schools, and other family oriented businesses.

On the day of our hearing, which took place April 14, 2014,  we took a bus with over 40 support people, in addition to our presenters. Our presenters included one CNM, our attorney we hired (as an expert in CON cases), the director for our health center, a representative from the Iowa Primary Care Association (IPCA), and a  nurse midwife/expert who is a past president of the American Association of Birth Centers. 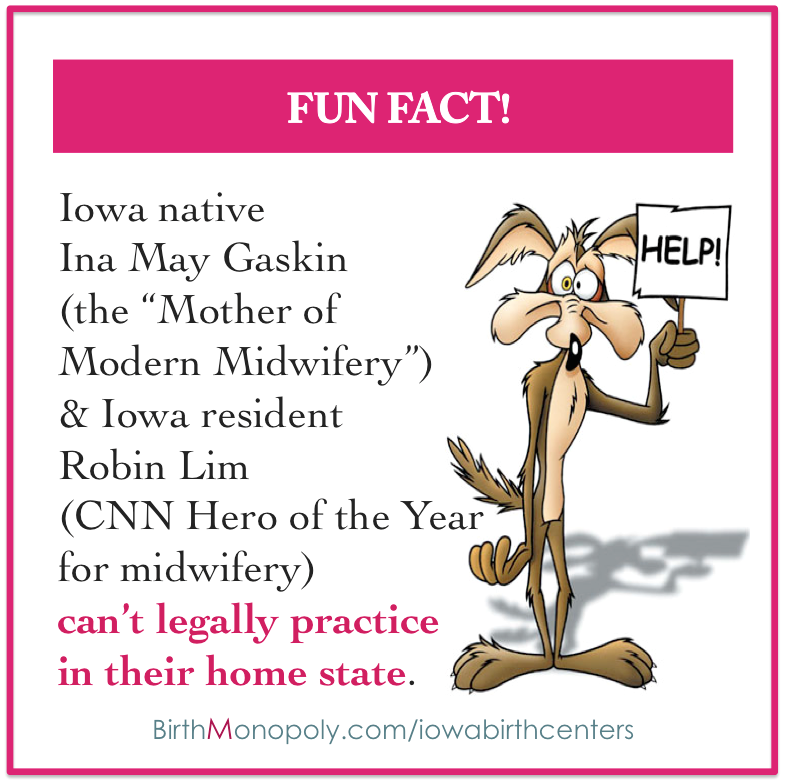 The opposition was the three hospital CEOs, their lawyer, a surgeon, a family practice doctor, a nurse who works in quality care for one of the hospitals, and the Chief Financial Officer for one of the hospitals. It was an unfortunate day for us, as the hearing was biased and unfair.  We did not get to present all of our material; we were cut off, and it was clear that someone had talked to the chair person of the CON panel of five… He was clear in his bias and even hostile.  At one point, he attempted to cut off one of our presenters (the gentleman from the IPCA), asking if he was going to hear “more pablum” from him [From Cristen: I had to look this up.  It’s the name of an infant food, and also used to characterize “overly bland,” “worthless or oversimplified ideas.”].  Meanwhile, the opposing panel with their seven presenters went on and on and on, and were not cut off or asked to stop. We did not get a fair chance at rebuttal (with the chairperson curtailing discussion, to call for a vote)…

So, in the end we were denied our certificate by a vote of 4-1. The main reasons for the denial were 1) The three hospitals already provided birth services: the panel did not understand the fact that this was a midwife model of care and NOT the same as what the hospitals offered;  2) The family doctors in the area would have difficulty recruiting new partners if there was a birth center running (because the doctors’ needs are more important than families’?); and 3) It is not safe……They made this determination without even looking at the research, including the most recent large birth center study showing impeccable outcomes–better than hospitals’, in many cases.  [This first point was roundly rejected by Kentucky’s Judge J. Phillip Shepherd in his February 2015 decision linked to here: “The Court is persuaded by the argument advanced by the Petitioner, specifically, that a hospital-based birth experience is not enough like an alternative birth experience to be considered similar.  While there may be some overlap in the services provided, the varying methods and settings have significant differences and it is a stretch to claim that traditional hospitals providing only hospital-based birthing environments offer services similar to an [alternative birth center].”]

It was devastating…probably one of the worst days of my life. We appealed the decision, according to laws in the state of Iowa. I am sad to say that the judge presiding over our appeal case sided with the first panel, saying that they had been given the discretion to make their decision. So, no birth center for Northwest Iowa.

When I read the Kentucky case, I was drawn to how closely it mirrored our case. I wish this had come out about five months earlier, so it could have been referenced to in our appeal…  And oh, how I wish we could have had a judge WHO GETS IT!!  The option we have now is to start all over again, and re-apply. We are not going in that direction at the moment, since it was very expensive, and we feel that we would not advance in our quest with the same people who are serving on the CON panel. What we needed was a judge like Mr. Shepherd to overturn the decision and grant us the CON.

You see why this breaking news has such relevance for me, personally, and for Northwest Iowa.

I so appreciate the work you are doing, Cristen, with Birth Monopoly…and the workings of Improving Birth, Evidence Based Birth, and all of the other organizations that are out there working hard to make a difference! I feel like we are all getting a foot in the door, or maybe a toe in the door…We need to keep working on this.  All of us.

Thank you for taking the time to read my story. I will continue to work towards better births and better informed consumers of health care.  Hoping that you will be making visits to an area closer to me in the near future.

A couple of suggestions the folks in Iowa (or anywhere else) might try, from an experienced lawyer–the former general counsel for the American Association of Birth Centers (AABC):

1.  Go get the law changed.  As an example, from the former AABC lawyer: “When my client first decided to open a birth center, the state agency that licensed birth centers required a medical director and other impossible-to-meet criteria for licensing (in addition to the Certificate of Need hurdle).  The agency didn’t care what the law said and told us that, even if we amended the law, they wouldn’t back down on these requirements.  So, we got some friendly legislators to pass a law to repeal the birth center licensing law, and allow birth centers to operate without a license.  We even got AABC to support that move, because the licensing law was so strict and the agency refused to change even if we got a more liberal law.  We won.  We got a lot of Republicans to join with us on getting rid of overly-restrictive state regulation and the law was repealed.  Organize all her supporters, the midwives, lots of other groups, and work for repeal.  The FTC will almost certainly file comments in support of her position and it will open up on important dialogue.”

2.  Threaten the hospitals with an antitrust lawsuit.  Threaten to file a complaint with the Federal Trade Commission (FTC).  The hospitals might claim, in their defense, that they were participating in a government agency process, but, per my lawyer friend, the FTC is looking to narrow this defense.  In fact, it was this defense that allowed the hospitals to do such an anticompetitive thing and think they could get away with it. Here is a link to the FTC’s thoughts, as of 2006, on limiting the defense, called the Noerr-Pennington defense, after two Supreme Court cases that first articulated it.  And here is the FTC study on what is wrong with CON laws.

UPDATE: I received the following message by email shortly after publishing this article:

“I just wanted to send you a private note instead of a public comment….  I had a C-section with my first baby and a VBAC with my second.  I believe I would not have had a C-section with my first if I had had a midwife.  I read your article about the monopoly.  The point made about the doctors’ livelihood is spot on.  I have a family member who is a doctor in Sioux Center, Iowa, and he has said if there is a birth center his practice at the hospital would be ruined.  We have had so many arguments about this and I feel this story.”