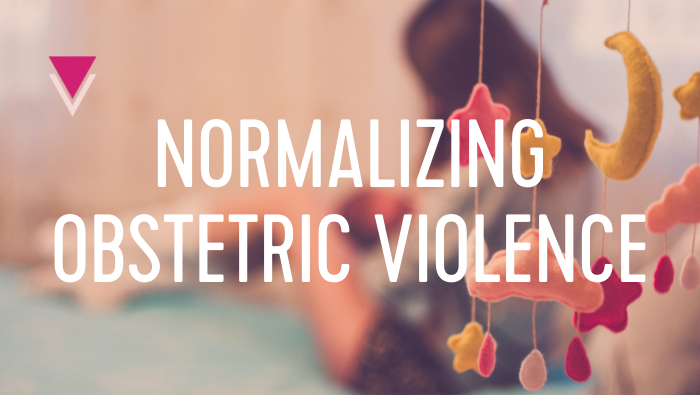 Today I came across this video post by Sarah Wild, CRNA, who says her intention on Instagram is to “set an example for young women, moms & wives to be the best version of themselves and enjoy life.”

Make sure your sound is on.

These kinds of posts by providers used to make me furious; now they make me deeply sad.

The casual misogyny here!  The trauma being perpetuated.

And coming from a woman, who cares for other women in one of the most vulnerable states they can be in.

The problem here is nothing to do with choices around pain relief, but the mocking of patients in a setting where abuse and disrespect are already well documented, fueled by paternalistic views about women making their own healthcare decisions.

For me, the knife twists a little more when it is a woman normalizing the disrespect.

I know some people will look at this and think, “It’s just a joke, calm down.”

My guess is those people haven’t studied trauma in maternity care, and haven’t listened to women and birthing people cry as they relate what  (or who) traumatized them during birth, like:

– Not being listened to

– Being made fun of

– Being dismissed or ignored

– Having their provider’s preferences determine how their birth goes, rather than their own

This is obstetric violence. 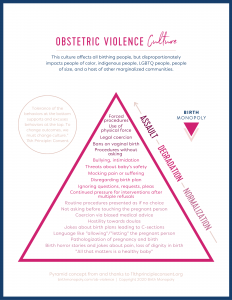 One in three birthing people describes their birth as “traumatic.”

Around one in nine has PTSD from birth.

According to research, the *majority* of birth trauma is not from the act of birth itself, but from how we are treated by those caring for us—who have power over us—during this vulnerable time.

When we feel unsafe.

Trauma can be created when we feel unsafe, period, whether the threat is physical or psychological, real or perceived.  The brain doesn’t necessarily distinguish between “This person has a knife to my throat” and “This person’s words are threatening my sense of self.”

Of course, in birth, virtually anything that happens in the room can be interpreted by the birthing person as a threat to our own safety or our baby’s, which is why providers must take care to protect our emotional space, as well.

As universally powerful as the bond is that connects a baby with the person who gives birth to them, imagine how damaging it is for both those souls when that bond is compromised.

A traumatic birthing experience can impact our lives in a multitude of ways.  Just a handful are…

– impeding bonding with our baby

– loss of trust in, and avoidance of, medical care

– withdrawal from a spouse or partner

Some of these effects will be temporary; some, without healing, will last forever.

I wonder if Ms. Wild entered the healthcare field with this attitude or if it developed as a response to the traumatic setting and the moral injuries she herself has suffered.  Some of it surely is mean girl behavior with deep historical and cultural roots—internalizing messages about ourselves like, “Women are silly creatures whose decisions don’t matter,” and letting those harmful beliefs ripple out to others.

Regardless of the reason, the cognitive dissonance is staggering: her stated intention to “set an example for young women, moms & wives to be the best version of themselves and enjoy life,” while publicly disrespecting those groups and perpetuating trauma that steals their joy and tears at family structures.

It just makes me so sad that people with these kinds of attitudes have so much power over people who are so uniquely vulnerable.

To Ms. Wild and those who have the privilege of attending births:

– Until you have learned to respect the humanity of women and birthing people, please leave the room.

– While you are gone, dig into your beliefs about yourself and women as a group.  How much respect do you deserve?  Do you deserve respect as a woman?  Do women?  Do you have a heart of contempt or love for birthing people and their babies?

– Learn about birth trauma and obstetric violence and how these things especially harm BIPOC and other marginalized groups.  Read Sabrina Butler’s story and this 2019 study on inequity and mistreatment in birth.

– Get brave and face up to how your behavior may have impacted (traumatized) others.  Go slowly; this will hurt.  In his book My Grandmother’s Hands, Resmaa Menakem calls this “clean pain”: pain that we lean into so we can grow, develop, and heal.

– Remember that you, too, deserve respect and humanity.  Believe that deeply.  I believe that about you—it’s why you make me so sad instead of just angry.

– Know that you can heal, you can forgive yourself, and you can do better.

If you were traumatized by your care providers in birth and find this post distressing, please use this opportunity to do the most healing thing you have space for today.  It can be as simple as closing your eyes and remembering to forgive yourself for things that were done to you, that were out of your control, that you might have done differently or didn’t do more.

You deserve care, compassion, and respect, and you can heal.