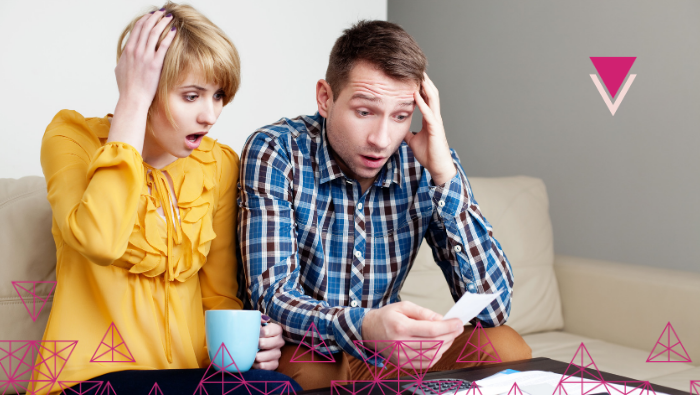 Until Dec. 2, 2019, this article is available only to students and graduates of Know Your Rights: Legal and Human Rights in Childbirth.

On Dec. 2, 2019 only, become a student yourself–get 25% off the Know Your Rights course with “cybermonday25” at checkout!

Care providers commonly believe that insurance will refuse to pay the bill for the around one percent of patients who leave the hospital against medical advice (or AMA), rather than staying for recommended treatment or observation. In fact, a 2012 University of Chicago study found that 43.9% of attending physicians and 68.6% of residents surveyed believed this to be true.

The authors of that same study examined hundreds of Chicago-area discharges for a period from 2001 to 2010, determining which patients had left AMA , whether insurance had paid for the visit, and, if not, why not.

Their conclusion was straightforward:

“There were no instances in which an insurance company denied payment because the patient left against medical advice.”

You can read the study (“Financial Responsibility of Hospitalized Patients Who Left AMA: Urban Legend?”) yourself here.

One of the authors, Dr. John Schumann, wrote later:

I also thought it important to go to the source: I called the insurance companies themselves. I talked with VPs and media relations people from several of the nation’s largest private insurance carriers.

Each of them told me that the idea of a patient leaving AMA and having to foot their bill is bunk: nothing more than a medical urban legend.

They were glad to tell me so, as this was a rare occasion of insurance companies looking magnanimous. One director went so far as to poll his company’s own medical directors—a half dozen of them–and found that several of them had been taught and believed the canard about AMA discharge and financial responsibility. He was happy to set the record straight.

“[P]atients and doctors beware: The next time you or your loved one has decided that it’s time to leave the hospital, don’t let us doctors coerce you into staying by threatening you with the bill.”

You can read his full article at KevinMD (“Does Leaving Against Medical Advice Stick Patients with a Bill?”) here. 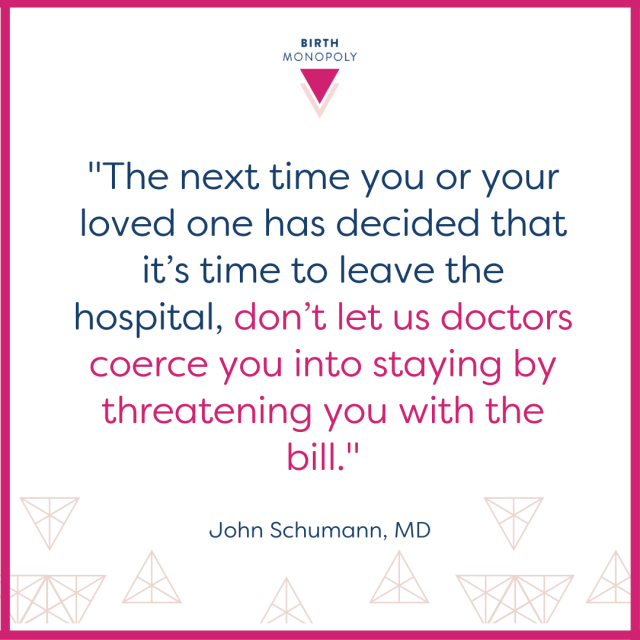 Informed consent for medical treatment–a basic human and legal right of all people–requires that consent is given freely and without coercion.  It is a form of coercion to use financial pressure as a way of directing care, and theoretically, coercion nullifies consent.  (Critical information like this for doulas, nurses, and other birth professionals is included in our Know Your Rights: Legal and Human Rights in Childbirth course.)

In birth, I have seen this tactic used to keep patients in abusive situations when they would prefer to go home until labor begins or advances, or to transfer to another facility.  One specific situation I have been involved in was when a doctor was bullying a young Midwestern mother to accept Pitocin in a normally progressing, unmedicated birth. This doctor routinely administered Pitocin to all birthing patients and said something like, “I’ve never delivered a baby without Pitocin and I’m not starting now.” This young woman, who already had a history of abuse, successfully avoided the medication with the help of a sympathetic nurse.  However, she left severely retraumatized by the way she had been treated by the doctor.  In her next pregnancy, she did everything she could to avoid the hospital.

A mother on the West Coast had been planning a VBAC (vaginal birth after Cesarean), but care providers told her when she presented in labor that the facility would not support her choice. They insisted she have surgery instead. They invoked the financial pressure of being stuck with the bill for her visit that day to dissuade her from attempting to go to another hospital where she could continue to labor. In distress and under duress, she eventually conceded and had the surgery. She left traumatized and having lost trust in the medical system.

Your Experience with Leaving AMA

Despite the strong evidence offered by the 2012 study authors, I have heard one or two firsthand stories over the years of patients being told by their insurance companies that they would refuse to pay for their visits that ended AMA.  And of course, there are many more stories of patients giving into and being traumatized by treatment they didn’t want because of this threat, whether it was real or not.

My suggestion, if you are ever told this as a way of keeping you in the hospital against your will, is to immediately contact the insurance company directly and get their response in writing, even if it is just by email. Remember that it is very common to get more than one answer from the same company in the same phone call, so be sure to escalate your question as far up the food chain as you can (and certainly beyond the person who answers the phone).

Also remember that you do have the right to refuse treatment, even when you are pregnant, as the American College of Obstetricians and Gynecologists specifically addresses in multiple statements you can read about here and here.

Please share with us in the comments! What has your experience been with financial coercion and leaving AMA?