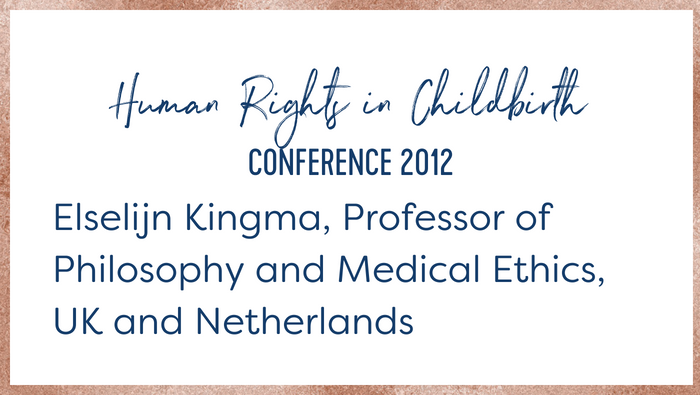 I was struck by this thought-provoking comment on home birth safety by Professor of Philosophy and Medical Ethics Elselijn Kingma. This very short video is an excerpt from a panel discussion, “Perinatal Mortality in the Netherlands: Facts, Myths and Policy,” which took place at the 2012 Human Rights in Childbirth conference in the Hague, Netherlands.

The video is less than two minutes long, but for those of you who prefer to read (like me), the transcript is below that.

“One thing that I always notice and that I find worrying in that respect is when the focus is only and ever on perinatal mortality—and much of the focus in the debates these last two days have been about that. And we can fight over and over about whether there is an 0.1 increase or a 0.4 increase or no increase or even a reduction in perinatal mortality rates in home birth. But what is very rarely mentioned is the overwhelming evidence that home births are safer for mothers. Not a little bit safer but massively so.

“It is one thing for mothers to routinely make that choice, to put themselves at risk fro their children, and that is always and ever an act of extreme altruism. But from a policy level a society has a duty to value all its citizens and all its humans equally. And from that point of view it is not at all obvious that we should always be so focused on perinatal mortality.

“So that’s the interpretation point.”

A former communications strategist at a top public affairs firm in Baltimore, Maryland, Cristen Pascucci is the founder of Birth Monopoly, co-creator of the Exposing the Silence Project, and, since 2012, vice president of the national consumer advocacy organization Improving Birth.  In that time, she has run an emergency hotline for women facing threats to their legal rights in childbirth, created a viral consumer campaign to “Break the Silence” on trauma and abuse in childbirth, and helped put obstetric violence and the maternity care crisis in national media.  Today, she is a leading voice for women giving birth, speaking around the country and consulting privately for consumers and professionals on issues related to birth rights and options.