Ep. 18 – Doulas, Advocacy, and Oppressing Ourselves | Rebecca Dekker [Mother May I Series] 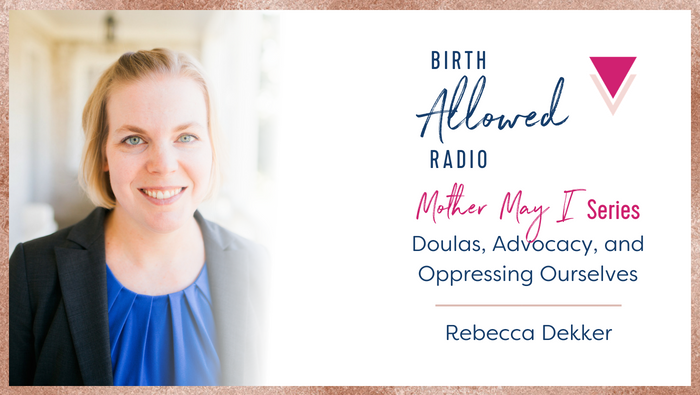 Mother May I Series

Rebecca Dekker, a nurse, teacher, PhD researcher, and founder of Evidence Based Birth®, talks with us about the hierarchy of oppression that exists in maternity care, and how that oppression relates to birth (especially doula) work and advocacy.

You can learn more about Rebecca’s work at www.evidencebasedbirth.com.

The Hierarchy of Oppression in Birthing

In the middle of the night one night, Rebecca got up and started doing research on systems of oppression. She found a theory that said that within any system that has a strong hierarchy, that hierarchy is propped up by two pillars of oppression. The first pillar is the oppressor and includes oppressive factors, like cultures, institutions and people with power that want to keep that oppression in place. Within the system of maternity care, this would include things like the laws governing midwifery.

The second pillar, which people don’t think about as much, is the pillar of *internalized oppression*. This is where people lower on the hierarchy consciously or subconsciously accept that they are inferior, and thereby prop up the system. They also keep other people on the hierarchy down through horizontal violence, which is aggressive or hostile behaviours among the members of a group who are at the same low level in the hierarchy. You see this among people who have a lot of responsibility but very little power (think nurses and doulas!).

All of this serves to preserve the status quo. When “lower” groups fight amongst themselves, they never come together and create change. Hurt and traumatized by the system, their lashing out is a side effect of the oppressive system in which they participate.

Intersectionality is a term coined by scholar and law professor Kimberlé Crenshaw.

Change begins with individuals who realize they are valuable members of the team. Just being aware of how you fit into the system can be helpful, because you can depersonalize the treatment and disrespect to respond to it more effectively.